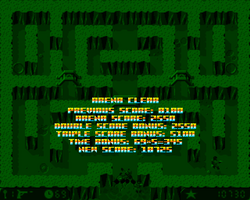 Wizard of Wor, the game Blastaway inspires to, has a DOUBLE SCORE bonus: if the player manages to kill the Worluk before it flees, the next dungeon will award a double score. Blastaway just had to have something similar: it has it now, and it has even a TRIPLE SCORE bonus! If the player kills the Dmewor and Exxwor with the first shot, he achieves, respectively, the DOUBLE and TRIPLE SCORE bonuses, which, as their names suggest, double or triple the current arena score.

Get rid of the wors!